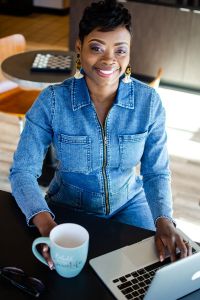 A response to George Floyd’s murder

Tuesday night, I just stared at the thumbnail, never drumming up enough courage to tap the arrow and watch the video that has garnered America’s attention. But it wasn’t just a thumbnail, it was the image of a helpless black man taking his final breaths while a white officer’s knee was pressed into his neck, robbing him of oxygen intake. I cringed while reading a few online articles. I shook my head. I palmed my forehead. I sat and wondered, Lord, not again. How many more have to die? How many more times does someone have to press record? How many more hashtags must we create? How many more names do we have to call? How can I help? What can I do? What can I say? How many more daughters have to live without their fathers because they’ve been wrongfully taken away?

We’re still victims of an old system that’s taking the lives of blacks – one senseless, hateful killing at a time.

But it’s not new. We’re familiar with the separation of families and the wrenching pain of watching our fathers and sons being taken away, chained, loaded onto ships, tossed into the ocean, snatched from a crying mother’s arms, sold as property and lynched from trees. It’s not new. White privilege is not new. Police brutality is not new. Neither are racism and discrimination without accountability. We’re still victims of an old system that’s taking the lives of blacks – one senseless, hateful killing at a time.

George Floyd. Say his name! He’s the helpless black man in the viral video. George Floyd, the father who left behind two daughters who today, when they call his name – Dad – won’t get an answer. They can’t receive a phone call, text message, card, gift, or love from their dad because some heartless (Keep my words clean, Lord!) individual took it all away from them. Here we are three weeks away from Father’s Day and his 6- and 22-year-old daughters can’t FaceTime him, hold his hands or give him a hug but they’ll hope their Father’s Day greetings will reach him from wherever they cry out.

When the family releases this information, say their names. The now grieving daughters will need your prayers, thoughts, well wishes, encouragement and clarity. They will need you to push for justice and equality so fewer, and eventually no, daughters will walk in the weight of their shoes.

This reminds me too much of Jesus – an innocent man – who was arrested and crucified on a cross while bystanders watched as He uttered a word to His mother and expressed His need for a drink.

I’m just an angry black woman, you say. I’m a tired, angry black woman with a purpose. I want the powers that be to hear the voices of non-racists, from every race and ethnicity, who are also tired and angry at a heartless people and frustrated with a system designed to oppress and destroy my people – our people. While I can still breathe, even if only by the written word, I will shout it to the mountain top, “but let justice roll down like waters, and righteousness like an ever-flowing stream.” I will stand for justice and equality. During the 1600-1800’s, we deserved it. In the 1900’s we deserved it. In the 21stcentury, we will continue the fight for what we deserve until we get it!

2 thoughts on “While I Can Still Breathe”